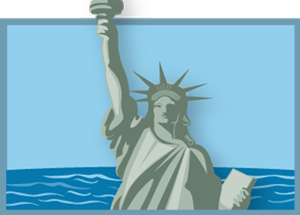 Citizenship status in the United States means that individuals are legal members of the country. Citizenship is associated with rights and privileges guaranteed by the U.S. government and also encompasses the expectation that citizens fulfill required duties in service of the country (e.g., registering for the military draft, paying taxes, and serving on juries). When the U.S. Constitution was ratified, a clause in Article I granted Congress the power to establish rules regarding the naturalization process, but did not specifically define who could be a citizen in the United States.

Accordingly, citizenship has been been defined over time through acts of Congress and the Courts. The 14th Amendment, for example, granted citizenship to all people born or naturalized in the United States. Before the Civil War, African American slaves were not recognized as citizens. Additionally, the late 19th century is characterized by restrictions on Asian immigration via the Chinese Exclusion act, and during World War II, Japanese Americans' rights as U.S. citizens were restricted due to fears associated with the bombing of Pearl Harbor. Although citizenship has become more inclusive over the course of U.S. history, immigration privileges and individual’s rights to obtain citizenship through naturalization, are continually being shaped by congressional law. The ongoing significance of this issue is evidenced by the continued debate regarding immigration reform that occurs during each election cycle. 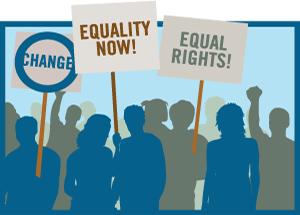 Although the Declaration of Independence declared that all men are created equal, the fight for true legal and social equality among minority groups endured through the 20th century. When the Declaration of Independence was adopted, the phrase: “all men,” traditionally referred to white European men of property. The status of African Americans in the newly independent states was contested throughout the writing of the U.S. Constitution, where the issue of slavery caused a disagreement between northern and southern representatives. During this time, women also were not considered as political participants in the formation of the new nation.

The struggle for equality among minority groups, particularly African Americans and women, continues to the present. There have been several landmark events that are celebrated as marked victories in obtaining equal civil liberties. For example, the 19th amendment granted women the right to vote nationally in 1920, and the Civil Rights Act of 1964 took steps to reduce discriminatory practices, both politically and socially. Decades (perhaps, centuries) of political action by individuals and interest groups paved the way for the election of the first African American president in 2008, followed by the nomination of the first woman for president (on one of the two major party tickets) in 2016. 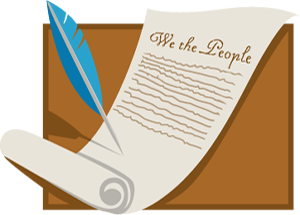 On July 4, 1776, the Declaration of Independence broke political ties between the colonists and the British government. Following this separation, delegates met at the Second Continental Congress to write a new constitution, known as the Articles of Confederation. Driven by fears of a strong central government, the Articles established a union of cooperation among the states. This political association carried the states successfully through war, but its limitations became more apparent as the United States began establishing its seat as a new nation among the reigning European powers.

In order to rectify the problems that emerged under the Articles of Confederation, representatives called for a meeting in Philadelphia to recommend revisions. For four months (May to September, 1787), George Washington presided over the debates at the convention, where delegates offered competing ideas for the establishment of a centralized government whose power could be limited, and where individual rights were not surrendered to a superior authority. Through a series of proposals, delegates began considering the establishment of three branches of government, consisting of a legislative body, executive leader, and a national judiciary. At the conclusion of the debates, these new ideas resulted in the writing of an entirely new U.S. Constitution that would take the place of the Articles of Confederation as the supreme law of the land. 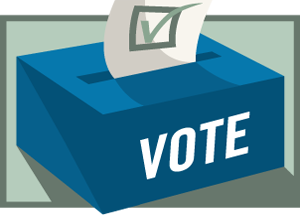 Under the U.S. Constitution, the United States is a democracy that is ruled by the people. As such, elections are an important component to the democratic process where citizens have the opportunity to share their voice in government and decide on which leaders are elected. In contrast, not all countries worldwide allow citizens to select the nation’s head of government. Monarchies, for example, usually have one leader who retains political status by birth. Dictatorships and authoritarian leaders in other countries typically seize power through force and limit individual rights and participation in government.

In the United States, the political process is characterized by many different features that shape local, state, and national elections. For example, the Constitution defines the terms of office for elected officials ranging throughout the legislative branch to the U.S. President. Furthermore, the years following George Washington’s unanimous election as the first U.S. President gave rise to a two party system where opposing political viewpoints compete for power (today, these are the Democratic and Republican parties). Political parties help to identify nominees for office, organize and inform voters, and campaign for their candidates to win the election. Overall, the election process means that each individual is responsible for shaping the nation’s public policy by selecting officeholders who they trust to make decisions that will benefit the common good. 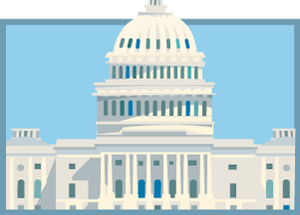 Together, these 535 representatives are elected by the people to serve in Congress and make laws on their behalf. Leaders meet in the U.S. Capitol building in Washington, D.C., where they debate the laws and issues which shape our nation. Simultaneously, the legislative branch provides a place for citizens to voice their ideas and opinions about public policy - whether this be through the direct election and communication with one’s representatives, or takes the form of peaceful assembly to reach a larger national audience.

Click on the gray square to add a source

Select a Question and Answer pair